Update on stuff I gave away.

Donated a bag of books to the library. This one, “Goodbye Without Leaving” by Laurie Colwin was arguably the toughest to let go of.  I kinda hope someone — first I thought a young gal, but then why be restrictive — reads it and is as taken with the romance, comedy and joie de vivre as I was. Actually it’s not my favourite book of hers, I forget the title of the one that is. But it’s one where the main character is a (white) grad student and wants to be (or ends up being?) a backup singer for an all black girl band. The Sugarettes perhaps. I’m not going to google. 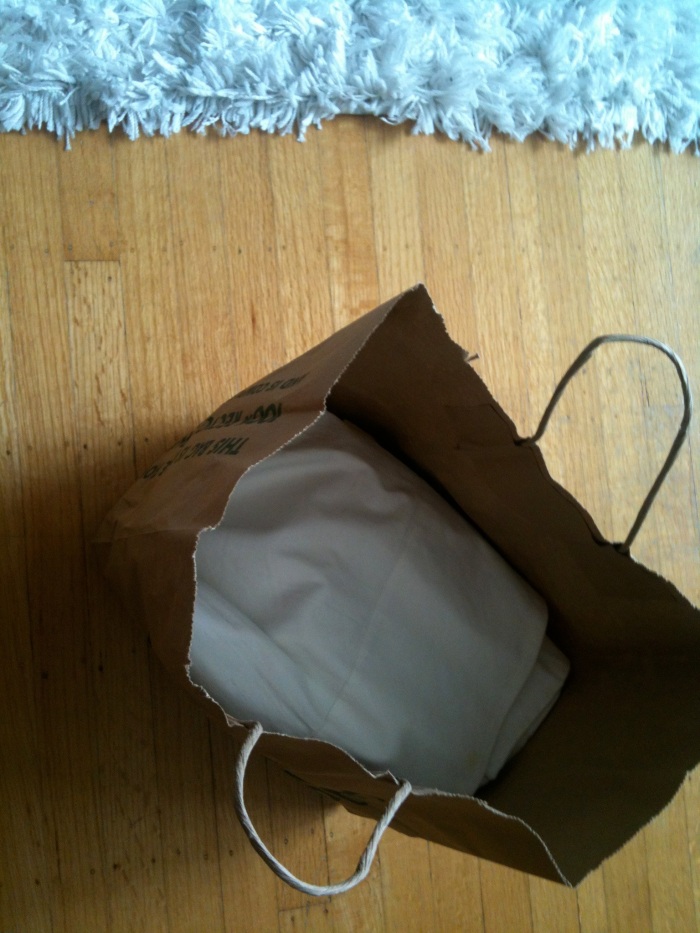 The start of another pile of clothes for the Sally Ann.

I’m delighted to say that Ms. Urbanista was the lucky recipient of the yellow boots, for having the best story about rainboots. She had the exact same pair in pink, and lost one, but kept the other in case she found it again. I am holding her to taking a photograph of her wearing one yellow and one pink rainboot.

And last, but certainly not least, a big (and belated) thank you to Drew Kail, a fabulous printmaker in Oregon, for the Illuminating Blogger Award. I really like the word illuminate.

There are rules. Today I feel obedient.

For  the usual suspects (Richard and John) who got me started on the Untitled nonsense:

Notes to the Milkman – “random ramblings about art”

Ben whose jokes also inspired the Untitled jokes (although I haven’t done that in a while – my sense of humour must have melted) : Year of Living Sober

Art Inspiration — Ann for her thoughtful and delightful blog: Image/Object/Text

I am breaking the rules and adding two more:

The Sweaty Knitter, Weaver and Devotee of Other Fiber Arts – knitting, fashion, nostalgia, vintage advertising. All around swellagant.

My feet are really wide, making it very difficult to wear girly shoes. I once did a Flash animation about it, and a woman emailed me to ask where I bought my shoes, as her daughter had really wide feet too. I was touched, but unable to help her.  In case the word Flash didn’t tip you off, it was in the dark ages of the internet (early 2000s I believe).

6 thoughts on “OT – Karmic Update and Award; Goodbye Without Leaving”