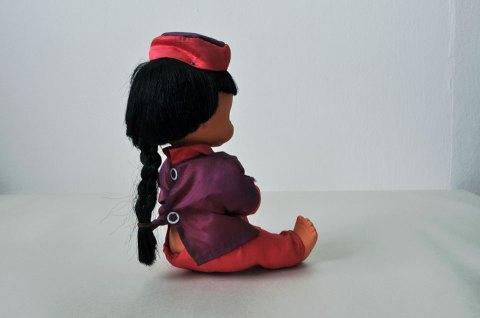 Having now published two off-topic posts, I’m losing track of what day it is. Maybe that’s not such a bad thing. I can sneak it up one or two days and reach 100 posts sooner. There has to be a finish line somewhere in sight.

This doll has a stamp/mark on the back of her head. It clearly says “Made in Canada” but it’s hard to read the mark itself. I say “Asian” because although her outfit looks very Chinese to me – she also has blue eyes ( I don’t think she’s avant garde enough to be a mixed-race doll, although being mixed myself, maybe she is and that’s why I was given her – she was  a hand-me down). Being Canadian,  perhaps there’s a slight chance she is supposed to be Inuit (aka Eskimo). I used to have an Eskimo/Inuit doll who was big and bundled up in a more “traditional” outfit – a white tinged grey snowsuit. She had beautiful mahogany skin and brown eyes flecked with yellow, that opened and closed with long lashes. She was amazing and I sold her on Craigslist for $10 two years ago. Regrets, I have a few….

This doll has become a recent fascination. I am taking a lot of photographs of her and she now constitutes reason #6 to justify purchase of macro lens. It’s something to do with her outfit, her hair and her articulated legs. Her face is squishable, her legs are hard plastic, but her arms and hands are also soft. She can stand up and standing she’s almost 10″.